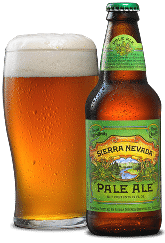 Two weekends ago, Kirk gamely agreed to go shopping with me. While he doesn’t exactly live for the excitement of waiting for me while I’m in a dressing room, he’s a good sport. We headed up to the Fourth Street shopping area in Berkeley.

The first store we entered, Margaret O’Leary, had a few items I simply had to try on. While in the dressing room, I overheard, “Want a beer?” When I exited the dressing room a few minutes later, there was my very, very, very happy husband, sitting in a comfy leather armchair, drinking a bottle of Sierra Nevada Pale Ale. He looked at me and declared, “I LOVE shopping!”

Later in the week, he started asking, “Hey, Babe, want to go shopping this weekend? Maybe back up to Margaret O’Leary?”

Now, at this point you may be wondering what this has to do with you, so let me tell you where I’m going with this.

Generally speaking, when a wife pops in to a clothing store to try on a few things, it gets boring for her husband. The odds increase that she will either just skip the store altogether or not spend as much time and money there, especially if she really likes her husband. After all, she doesn’t want the guy to suffer too much.

By spending a tiny amount of money to give this man a beer and provide a man-cave-worthy armchair in which to drink it, Margaret O’Leary is developing a devoted customer relationship with him. Now Margaret O’Leary is the one store he really wants to visit with his wife.

It also becomes the first place he thinks of when her birthday or another gift-giving occasion rolls around.

By thinking about the person who influences the buyer with as much consideration as the buyer herself, Margaret O’Leary eliminated a barrier to buying, in this case the tedious boredom of the spouse, which she brilliantly converted into a darn good time.

So here’s my question: what’s your free beer?

What’s the no-brainer that’s looking you right in the face, that none of your competitors have thought of, to build a relationship with the influencer? What’s the inexpensive, simple, thoughtful thing that your buyer’s influencer would really like? How fast can you provide it?

What’s your free beer? Let me know in the comments below.