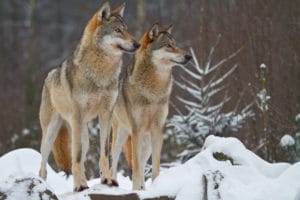 I recently caught up with a client who has very successfully created and implemented large-scale, transformative change in three very different companies. He used a simile so spot-on that I’d like to share it with you. While it might seem a little cold at first, try to be open to the idea. It’s practical and useful.

It’s very hard to break away from the pack. Only the strongest members can break away and assert themselves with new behaviors, in setting or following a new direction. To introduce change, you must identify the 2 – 3 strongest wolves and begin with them.

When the strongest wolves begin to change their behavior and strike out in a new direction, at first the others will turn against them, and try to bring them back to the established pack norms. If the strong wolves persist and have a few early successes, the remaining members of the pack will, for the most part, begin to follow them. Those who still don’t want to change will move on.

When entering a new organization, this client observes his team very closely and sizes up which of the managers are strong enough to break from the pack. If he doesn’t have a critical mass of strong wolves, he hires 2 – 3 people who have the strength to break away from the pack and set a new direction. He brings in the strongest wolves he can find, because he knows that lots of managers can manage a function, but few are strong enough to lead transformative change.

He and I have found the same pattern at all levels – if you have only one wolf strong enough to break from the pack, it’s not enough. Eventually, he or she will tire of trying to get peers to change their perspectives, of being on the receiving end of jealousy from teammates not quite confident or strong enough to transform, and of being the lone person taking a chance on a big change. Worst of all, the strongest wolves are independent. They’ll leave, and you’ll have to start all over again.

That’s one of the reasons it’s important to size up how strong each individual wolf is, and also ask, “How strong is the pull of this pack?”

If you want to create transformative change, and you don’t have critical mass, go find it quickly. Without a few strong wolves, the best process, tools, influence, and communication just won’t be enough. The pull of the pack will win.

How can you spot your strongest wolves? In my experience, there’s rarely a direct correlation between performance and strength. Surprised? There are often several truly outstanding performers who always get results, but who stay solidly in the middle of pack when it comes to transformative change. Performance isn’t where you should look to size up the strength of a wolf.

There is, however, a connection between potential and strength. Nearly all of the strong wolves have potential to step up one or two levels in the breadth of their responsibilities. There are several factors, a mix of traits and experiences, that contribute to their potential.

First and foremost, they form their own opinions and naturally influence the opinions of others. They are often widely read and well informed on everything from their industry or profession to world politics and cultural trends.

They are not necessarily alphas in the way that we think of a wolf pack having an alpha at the top. Some are, but many are neither leader nor follower in any pure sense. They form their own opinions and choose what to lead and whom to follow based on these opinions. Likewise, their choices aren’t driven by a desire to compete and win against the rest of the pack. They really do want everyone to transform and have a shared win.

Regardless of whether they have any training or education on strategic thinking, they instinctively look at the big picture and make connections between day-to-day activities and long-term goals. With them, executive coaching is less about building a strategic mindset and more about simply improving what’s already there by adding discipline, structure, tools, and processes.

I nearly always find that they have done something quite unusual compared to their peers, and this experience has shaped a willingness to take chances and a much higher tolerance for personal risk. A cursory look at some of the strong wolves I’ve worked with turns up the following:

One strong wolf owned and operated a restaurant in Argentina and continued to co-own it and stay involved in major financial decisions after moving to the US, where he held a full-time job transforming an organization born through an uneasy acquisition. If you’ve ever seen the statistics for restaurant failures, you know the risk involved in opening one. It made a difficult integration look like a walk in the park.

Another strong wolf built hospitals in Afghanistan through a non-profit organization he had co-founded with his wife, both before and after his stint introducing large-scale change for a mid-sized corporation.

A third strong wolf left home as a teenager, lived in his car, twice went broke and came back from it, and taught part-time in public colleges throughout most of his executive career as a way of giving back to the education system that pulled him out of poverty.

As you can imagine, the strongest wolves are often more difficult for the typical employee to relate to, or even to understand. They are simultaneously immersed in the organization and somewhat distant from it.

When you’re working on their professional development, it’s not uncommon to have to remind them to reach out to their peers more frequently. Excellent situational awareness is key to their success, and sometimes it needs to be developed because they don’t always understand that they are different and need to be sensitive to the emotions and motivations of others.

It’s also not uncommon to have to earn their respect (which isn’t easy), before they will give serious attention to your ideas for their development.

It’s worth it, though. You can never, ever, ever lead transformative, large-scale change alone. You simply can’t. You need your whole team, and that starts with the strongest wolves.

What are your thoughts about this wolf pack simile? Am I on target or do you howl in protest? Let me know in the comments below.